Always believe in your career dream: it can come true!

From the GTTP to the Hong Kong Disneyland Hotel. The story of Yen Li

Crishner Lam is a 11-year veteran instructor in GTTP Hong Kong’s program, which serves some 15,500 students in 155 schools. Earlier this year he took a class to tour the Hong Kong Disneyland Hotel, where one of his former students, Yen Li now works.
Here is the story of Yen Li’s career since she was a GTTP student at the Lok Sin Tong Young Ko Hsiao Lin Secondary School*, as told by Crishner.

“Yen was deeply inspired by everyone she met at the meeting and by everything she experienced during the event. She became determined to follow her dream and make a career in Travel & Tourism” wrote Crishner.

“The following year” he added  “Yen graduated with a good grade in her T&T public examination and proceeded directly to study T&T at the Institute of Vocational Education – a renowned diploma program offered by the government-established Vocational Training Council. Here she met Chammy Lau, who was her teacher and who now is both the GTTP Hong Kong’s Director and a lecturer at the famous HKCC PolyU”.

The momentum, the passion and the international exposure that the GTTP had brought to Yen led to her being chosen for the highly sought-after ‘Disney Scholarship’ to Walt Disney World in Florida for one entire year.

“At Disney World,” wrote Crishner “she strove, she learned, she developed herself all-round, she worked very hard, but also used her time-off days to experience more through travelling to the Caribbean and within the USA.” “After returning to Hong Kong – Crishner continued – Yen joined the Hong Kong Disneyland Hotel and has moved ahead quite successfully in her career. She was promoted to ‘representative host’ position, focusing on generating high quality service to the resort’s VIPs. Her proactive character made her one of those who create key service elements and also train the resort staff members to run the famous ‘Disney’s Hospitality in Practice’ day training program for students at secondary and post-secondary levels”.

“To create a happy surprise, she decided to conduct the day training program herself when I took my class to the Disneyland Hotel” told Crishner. “It was a ‘magic moment’ for me, her former teacher, as well as for my students.”

“GTTP’s student conference changed my life… and you should always believe in your career dream… it can come true!” Yen told the students while, as they say in Hong Kong, “a ‘bit of smoke’ got in her eyes”. 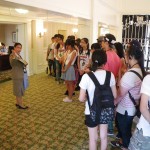 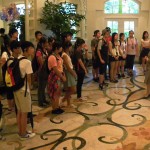